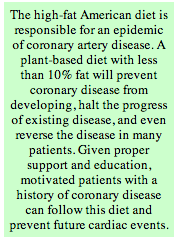 Even if all Americans kept their total cholesterol below 200 mg/dL, as recommended by the American Heart Association, millions would develop coronary artery disease.

Strong evidence from a wide variety of sources shows that total serum cholesterol levels must be kept below 150 mg/dL to stem America’s epidemic of coronary artery disease. My own experience with heart disease patients shows that cholesterol levels can be kept below this threshold with a diet low in lipids and cholesterol-lowering medications as needed. This low-lipid therapy stops coronary disease from progressing and even reverses it.

Unfortunately, our national health and medical organizations continue to recommend a cholesterol threshold of 200 mg/dL and a diet containing up to 30% fat, despite clear evidence that this threshold is too high to prevent or cure heart disease. It is true that these recommendations have the potential to reduce the incidence of heart disease, but only by a moderate amount. Unfortunately, when it comes to lowering cholesterol, moderation kills. With lower lipid levels, coronary artery disease need never exist. When it does exist, it need never progress.

A Plant-based Diet for Advanced Disease

In 1985, I embarked on a program to help a group of patients with severe coronary artery disease. Most were debilitated by angina and other symptoms, and their angiograms showed severe stenoses. In some cases, disease was so advanced that standard interventional techniques such as bypass grafts or angioplasty could no longer be offered.

These patients (1 woman and 23 men) agreed to adopt a plant-based diet with fats making up less than 10% of calories. They ate no oils, fish, meat or dairy products (except skim milk and non-fat cheese and yogurt). The patients also took cholesterol-lowering medication as necessary to maintain their total serum cholesterol below 150 mg/dL.

Social and personal support was crucial for this group to learn about and follow the program, which was called arrest-and-reversal therapy. At enrollment, we discussed the treatment objectives in depth with both the patient and his or her spouse. For the first 5 years, the patients came to the clinic twice each month; visits were once a month during the second 5 years, and quarterly after that. On the evening of each clinic visit during the first year, the patient was telephoned to discuss his or her lipid results, diet, and medications.

The patients also met several times a year as a group to discuss the program, share recipes, and socialize. I committed myself to the same diet, and patients reported that this was an additional source of support.

No relaxation or structured exercise regimens were included in the program. In my opinion, people have a limited number of lifestyle modification “credits”; if they spend all their credits by trying to change too many aspects of their lifestyle simultaneously, they may “go broke” and fail to change any of them.

At 5 Years, Heart Disease was Halted

Eighteen patients adhered to the diet and medications, bringing their mean cholesterol level from 237 mg/dL at baseline to 137 mg/dL at 5 years. None experienced any coronary events; in contrast, these 18 had had 29 events in the 8 years before the study. None underwent any interventions. All 11 of those who underwent angiography at 5 years had no additional stenosis, and 8 had regression.

One patient died of ventricular arrhythmia just after his 5-year angiogram, but the angiogram showed that the disease had regressed and autopsy found no evidence of myocardial infarction.

Six nonadherent patients were released from the study within the first 18 months to return to standard care. Although their baseline levels of disease were similar to those of the adherent patients, these 6 patients suffered 13 new cardiac events after leaving the study. 1.

At 12 Years, the Benefits Continue

Today, the remaining 17 patients continue to follow the prescribed diet and medication schedules. At 12 years, their mean cholesterol level was 145 mg/dL. They experienced no disease progress or interventions. One left the study briefly but suffered a recurrence of severe angina and returned to the diet and medication after undergoing an elective bypass operation. The rest experienced no coronary events. 2. These results are important because they show that sharply reducing cholesterol levels is safe and that it stops coronary atherosclerosis rather than merely slowing it.

Support from Other Research

When our arrest-and-reversal study began, strong observational evidence already supported the benefits of low cholesterol levels. For example, 35% of the cases of ischemic heart disease found among the Framingham Heart Study cohort occurred among those with total serum cholesterol levels between 150 and 200 mg/dL. In contrast, few of those with levels below 150 mg/dL developed the disease, and none died of it. 3. Atherosclerosis was already known to develop silently over many years of high-fat diets; autopsy studies of young, healthy men killed in the Korean and Vietnam conflicts found that many already had advanced atherosclerotic lesions. 4,5

More supporting data continued to pour in. For example, coronary artery disease is virtually unknown in populations that subsist primarily on grains, legumes, vegetables, and fruits, such as those in rural China. 6,7 Normal adult cholesterol levels in these populations range from 90 to 150 mg/dL.

More than 10 years ago, Blankenhorn and colleagues showed that coronary artery disease can be halted or reversed by lowering lipid levels with medication. 8 More recently, Dean Ornish and other investigators confirmed the benefits of a low-cholesterol diet. Their results showed that patients derived the most benefit if lipids are lowered by diet combined with medical therapy, rather than by diet alone or by modest diet changes combined with medication. 9-11

The AVERT study provides similar supporting evidence. The study showed that aggressive lipid-lowering medication is at least as effective as angioplasty plus standard care. However, the AVERT patients continued to eat a fairly standard diet, and 13% of them continued to experience cardiac events. This suggests that medication alone cannot confer the full benefit of lipid lowering. 12 A recent review of cholesterol-lowering studies showed that the degree of benefit is related directly to how much cholesterol is reduced. 13

Low Cholesterol Addresses the Cause of the Disease 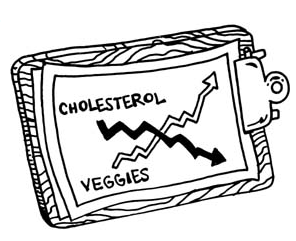 Coronary artery bypass grafting, angioplasty, and other coronary interventions are directed at severe coronary stenoses. However, 85% of heart attacks are now known to be cause by rupture of smaller, unstable plaques, many of which are not even visible on angiography. Thus, costly “heroic” interventions do not reduce the risks of new heart attacks, slow disease progression, or even prolong survival for most patients. 14In contrast, lowering levels of total cholesterol and low-density lipoprotein (LDL) prevents coronary disease from starting or progressing. Lowering lipid levels also lowers concentrations of harmful foam cells within plaques and reduces the quantity of proteolytic enzymes. As a result, plaques may shrink, their caps stabilize, and they become much less likely to rupture.

Despite the strong evidence in favor of reducing both dietary fat and serum cholesterol, Americans continue to increase their consumption of fat. Television and print advertisements aggressively push delicious, colorful, habituating, high-fat food. At our most memorable and emotional events – birthdays, weddings, funerals, and banquets – the food is even richer and more harmful than our everyday fare. Fad diets even promise weight loss and better healthy by increasing our consumption of fats and protein. It is clear that we live in a toxic food environment. Unfortunately, the American Heart Association has failed to show strong leadership on this issue. If the coronary artery disease epidemic is seen as a raging fire, and cholesterol and fats are the fuels, the AHA has merely recommended cutting the flow of fuel. The only tenable solution is to cut off the fuel supply altogether – by reducing cholesterol levels to those proven to prevent and reverse coronary disease.

A Way to Prevent CAD?